Originally posted May 30, 2017 at pilotonline.com.

VIRGINIA BEACH – The entire fifth-grade class at Centerville Elementary School filed into the gym on May 26 for personalized workouts. Students paired up and worked out at 100 stations that stressed flexibility, strength or cardiovascular fitness. 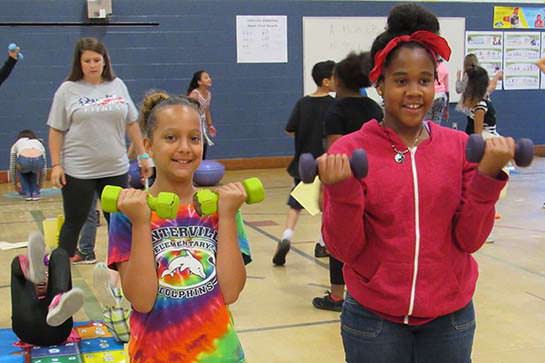 “It’s important to teach skills that emphasize physical literacy,” said Warren. “Our ultimate goal is for the children to learn skills that they can take anywhere for the rest of their lives.”

Known as VBSTRONG 2029, all Virginia Beach City Public School students in grades one to 10 who are enrolled in physical education classes participate in the new initiative, held on the last Friday of the month.

VBSTRONG 2029 is part of the national 50 Million Strong campaign initiated by health and physical education teachers. The goal is that by the time today’s youngest children – the class of 2029 – graduate, all will have the knowledge and skills to lead healthy and active lives.

In April, students across the city collected data from physical fitness tests that revealed their strengths and weaknesses. Using the results, each student designed a personal fitness plan.

For most students, strength is a weakness, relative to flexibility or cardiovascular fitness, said Warren. During the session, the 120 students were given freedom to work out at the stations they selected and for the length of time desired. A suggested number of reps and sets were noted on cards, but the emphasis was on movement: If a station was being used, students were told to find one that was free.

“In the past we would tell them what to do, but not on VBSTRONG days,” said Warren, a Chesapeake resident. “It’s the same as if you or I walked into a recreation center for a workout. You develop self-awareness of your strengths and weaknesses, learn to make choices and utilize the available equipment.”

“Some of the stations were hard, but doing this makes us get faster and stronger,” said Brooke Miller, 11.

“After the workout, I feel unstoppable,” added Dalton Price.

Warren opens up VBSTRONG 2029 workouts to any parent who would like to participate, but he hasn’t had many takers thus far.

“I’m hoping that will change,” Warren said. “If I can get one parent hooked on fitness, then I have one child hooked.”